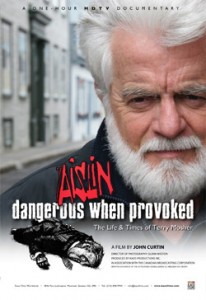 Aislin is the name of Terry Mosher’s eldest daughter and the nom de plume he has used throughout his more than 50 years as a cartoonist, primarily with the English-language newspaper The Montreal Gazette.

Born November 11, 1942 in Ottawa, Ontario, Mosher attended fourteen different schools in Montreal, Toronto and Quebec City. Graduating from the École des Beaux-arts in 1967, he famously won entrance to this fine arts college (now part of UQAM) by forging his high-school graduation certificate. It’s still his favourite piece of work. Mosher worked for The Montreal Star before moving to the Montreal Gazette in 1972. Over the years, his work has appeared in numerous publications across Canada and internationally.

To date, Mosher has written or contributed to the publication of 51 books, his latest being a biography of legendary Canadian political cartoonist Duncan Macpherson.

Along with author Peter Desbarats, Terry Mosher produced an extensive history of Canadian political cartooning titled “The Hecklers”, published in 1979. A film based on the book was released by the National Film Board of Canada in 1980.

Mosher is regularly invited to speak on satire and the importance of cartooning as a communications tool. He has also served as a judge and speaker at international cartoon competitions and conferences, most recently in the United States, Portugal, Turkey, China, Australia and Cuba.

Filmmaker John Curtin won a Gemini for best biography documentary of 2007 for his “Life and Times” on Terry Mosher titled “Dangerous When Provoked”.

Mosher was named an Officer of the Order of Canada in May 2003 and four years later, was awarded an honorary Doctor of Letters from McGill University. The winner of two National Newspaper Awards and a gold National Magazine Award, Mosher was inducted into the Canadian Cartoonist’s Hall of Fame in 2012 at a ceremony in Toronto during the 8th Annual Doug Wright Awards for Canadian Cartooning. Mosher is the president emeritus of the Association of Canadian Cartoonists.  In 2018, Terry Mosher and his good friend Serge Chapleau, the cartoonist for La Presse, both received honorary doctorates of Law from Concordia University in Montreal.

“Wickedly funny with a king-sized heart. How does this guy always manage to get it right?”  –  Douglas Coupland